Top 5 Inspiring stories for UPSC Preparation to Realize Your Potential

How can you also tops UPSC rank after reading this inspirational stories?

Hard work and determination are the keys to a good rank in the UPSC exam, which are well proven by many aspirants. If you are low in academics, are financially not sound or have poor communication skills and feel low that you are not able to suitable for the exam, then read the following stories. The background of these students is not that sound but it was their determination that led them to be an “Officer” in the most prestigious post in India i.e. IPS.

Here are the top 5 inspiring stories for UPSC preparation:

We picked the best fives out of many such motivational stories to show you why you can also top rank UPSC exams.

He is the best example of determination and patience. Jagneysh cleared his IAS in the 7th attempt with 156th  rank. He hails from a poor family in Tamil Nadu. As he was not financially sound, he opted for self-study. He kept the fire of hope ignited in him even after six consecutive failures in UPSC. His father is a labor in a local factory and his mom is a housewife.  He is a mechanical engineering graduate and worked in a company in Bangalore with a salary of INR 2000 until he realized his dream to serve his village and uplift society. He left his job and came back to pursue his dream. After the first two attempts, he realized that coaching is essential. So, he worked as a waiter in a local Chennai restaurant for his daily needs and coaching fees. He cleared prelims 5 times but failed in mains. On his sixth attempt, he got rejected in the Interview and finally, in his 7th attempt, he was able to crack the exam.

Shweta was one of the top three women qualifying the UPSC exam in 2015. Finally, her dream of serving the public was realized when she secured 19th rank in the most prestigious of the country.  Shweta gives complete credit to her parents, who gave her good education despite belonging to a middle-class family. She says educating a girl child in such family like theirs is a challenging task and she owes her success to her parents.  Shweta is undoubtedly a perfect example of strong willpower and hard work.

Check out what are the technology trends in education. 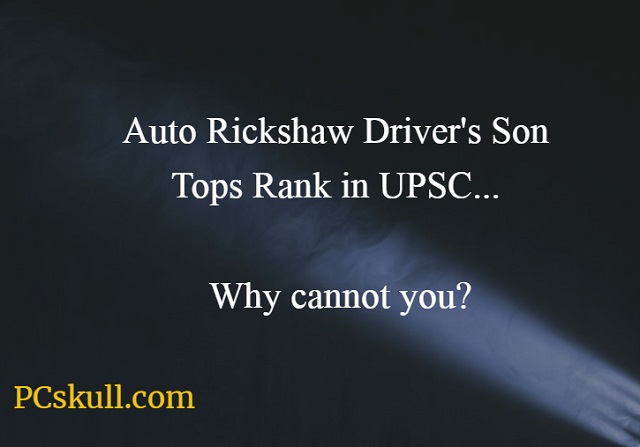 Ansar (21) is the youngest UPSC aspirant to crack the exam in his very first attempt. He secured AIR 361 in 2015. His father is an autorickshaw driver and his brother is a mechanic at a local shop in Jalna, Maharashtra.

Ansar was a bright student throughout all his academic career. He was very clear about his ambitions from the very beginning so he devoted his three years of graduation in preparing for UPSC.  Defying all the norms and the religious discrimination, his achievement is worth applause. Sharing his story, Ansar said that as he comes from a minority community and a poor family, he understands the insights of the differences in society better.

Kuldeep Diwedi (27), son of a security guard at Lucknow University secured a decent rank in UPSC exams. He gives all the credit to his father, Surya Kant. Surya Kant supported his child’s dream despite the feeble economic conditions. Kuldeep said that it took almost half an hour to explain to his family that he is now an “Officer”. As per his family, a sub-inspector holds the highest rank in the police department. After understanding the achievement of their son, tears came out rolling of their eyes.

Boycotted from society, Komal Ganatra’s story is really inspiring and a perfect example of women’s empowerment. Married back in 2008, she was thrown out due to not bringing dowry. She made all possible attempts to get back into the family and lead a normal life, but everything was in vain. Finally, she decided to prepare herself for UPSC exams and get her life back on track. This 32-year-old lady realized her dream of becoming an IAS officer in four attempts.

What is your excuse?

These inspiring stories for UPSC preparation inspire us that no matter where we come from, what is our religion or gender, strong determination, and iron willpower is enough for achieving your dreams.

Why You Should Use Online Writing Service for Students?

[7 Tips] How to Make a Great Career as a Realtor?

Employment Background Check | What will Disqualify You?