Is RX Java for Android the best decision?

RX Java is one of the most talked about libraries for sanctioning of Reactive Programming in Android development. In the last post, we have shared how you can build your first Android App using Android Studio.

In this post, you will get to know- why you should start using RxJava for Android? 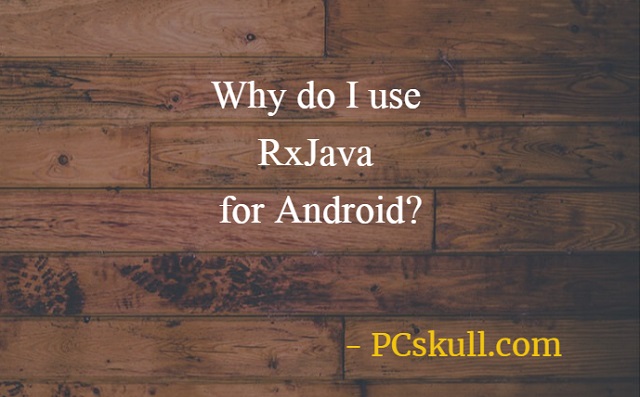 Before getting into this. let’s see…

RxJava is a Java VM implementation of Reactive Extensions. It has snowballed into the most crucial skill for Android development.

The RX is a set of interfaces and methods which provide a way for developers to solve problems briskly, easy to grasp, and can be maintained with least effort, moreover, avail a set of tools to help you write tidy and sober code.

Functional Reactive Programming is a little tricky initially but once you comprehend it, it will turn out to be a great aid.

What are the Advantages of Using RxJava for Android?

There are many perks of working on Android with the platform of RX Java. Some of which are listed below:

During the dependency of two API calls, there are chances of getting continuous Call Back from any of the API (generally the first one).

Particularly, CallBack occurs when performing several asynchronous operations in a series where the next action depends on the results of the previous operation, making the code untidy and hard to manage.

RxJava renders the way to terminate the urgency to build layers of callbacks.

RxJaava has gained its popularity in the past few years when Netflix used it for eliminating the hurdles while performing dependent API calls.

RX is a single-threaded initially but empowers to designate more absolutely in many threading models conceiving both background and callback tasks.

Android specifically allows UI updates on the main thread. With the help of RxJava, the code becomes clearer regarding operations updating.

RxJava aims to help in building multi-threaded Android apps, by providing special schedules and operators. These provide ease in specifying the thread where work is performed, and the results of these work are posted.

AsyncTask sometimes has errors that occur in the background thread. They are difficult to go along when updating the UI thread using the on PostExecute () method.

Moreover, there are drawbacks in quantity as AsyncTasks can be dispatched concurrently.

RxJava helps to identify errors on the surfaced. One must put a lot of patchy code to handle the sudden situation, resulting in a lot of repeated and bulky code.

The bulky and messy code is more prone to bugs and other errors, which eventually extends the time frame to hunt it down.

RxJava helps to simplify the code that is required to handle data and events by allowing it to describe the desired goal, rather than writing a list of instructions for the app.

It also provides a standard workflow that is used to handle all data and events across the application—create an Observable> create an Observer> assign the observable to that observer rinse and repeat.

This approach makes the code very straightforward and human-readable.

Once Observables are set, RxJava serves a large range of operators that can be used to filter, merge and transform the data that are omitted by the Observables.

The quantity of the operators can increase to get desired application needs of the data stream.

The actions may include combining data from multiple streams, filtering the newly merged stream, using the resulting data as the input for a subsequent data stream and much more.

Today, Android apps are more popular than iOS apps. As the Mobile app competition is increasing, the expectation with it is also increasing day by day.

In addition to this, it must also focus on the management of a network connection in the background and respond immediately as per the activity from the user side.

The RxJava library was designed that give a control over the management over a wide range of data, simultaneously on the events in the real-time too.

It is making this a very powerful tool for building some highly responsive application that modern mobile users expect.

These are only a few benefits of using RxJava for Android stated by many.

For example, one of the obstacles in coding robust Android apps is the dynamic nature of changing inputs. But RxJava is finely suited to comfort Android in this subject too.

The combination of RxJava and Android has turned out to be a huge success. What’s your thought?

Ashley Marsh is a Senior- Content Writer at Maan Softwares Inc. She has been with this company for the past four years. She is specialized in the technical writing genre, especially in mobile development, web design, and the latest technologies. According to her, it has been a great exposure for her as each day the technology is updating itself resulting in new ideas that keep her fresh daily.