5 Reasons | Why Android Apps are So Popular Today?

It is no news that Android devices are some of the most popular devices in the world, which has also made Android apps so very popular amongst Android users today.

There are many different devices from different manufacturers that are based on Android and it is the apps by Google’s open-source operating system that pushes the sales of Android devices even higher.

Both Android tablets and smartphones come typically come with some standard and most popular Android apps but users also download many more new apps from Play Store after purchasing an Android device. This is so because they are hooked to the wide range of functional apps available on Google’s Play Store. 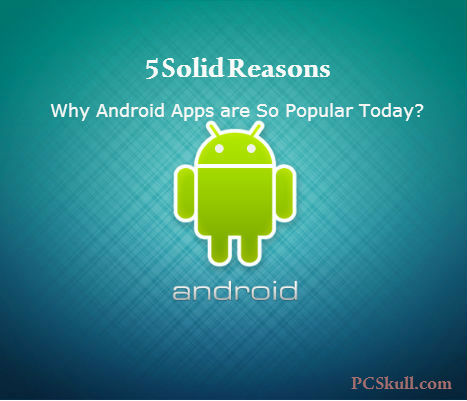 Why Android Apps are So Popular Today?

Let us take a look at 5 solid reasons why Android apps are so very popular today.

1. New App Launches Every Now and Then

There are mobile app developers across the world who truly understand the huge market share of Android mobile apps and that keeps them on their toes to come up with new and more exciting mobile apps based on Android.

At the same time, they keep updating the older existing apps with newer features. As there is no strict copyright restriction it becomes easier for developers and companies to register their app.

Even anyone can develop their own app and register it on the Google Play store. It is easier now to learn and to develop the android app with full online tutorial code.

As technologies keep on changing, some of the newer updates suggest that Android apps are going to get all the more popular.

There are many different types of OS used in the smartphone. Some of the highlights suggest now that Android apps will soon be also available for Windows devices, which will obviously expand their customer base.

This cross-compatibility will definitely help users to freely use the apps of their choice without worrying about the OS platform.

All smartphone/tablet users download apps that are supported by their device.

It won’t be wrong to say that Android apps are so popular today because there is a huge customer base of Android mobile phone users who download Android apps in big numbers every single day.

Around 33% of mobile phone users currently use Android-based devices!

You may like to Read: 5 Apps that you must have

4. Apps for different Needs and Requirements

As there are hundreds of thousands of mobile apps on the Play Store almost everyone finds some app or the other that they can use.

This, in turn, gives a lot of flexibility to the users to download different apps and experiment and check if those apps suit their needs and requirements.

You can drag your favorite apps to the main menu and use them at your ease.

Just like operating systems of different mobile the pricing of mobile apps also has huge impact on the total popularity of those apps.

Along with that, even the paid apps have free trial versions that can be checked out by users before they make an actual purchase of the complete version.

She has decades of experience in content writing and she is with a passion for helping out the students with plagiarism free custom essays. Her areas of interests are very wide and in spare time she is also contributing as a writer for different blogs.